It was off to Portsmouth last night for a Ukulele event, Festive Ukes, organised by Ben Rouse and sponsored by RGT.

Ben’s event was a fund raising workshop and gig at The Cellars in Eastney for the charity Music In Hospitals. It was promoted as “Christmas Ukes” and attracted people from the many ukulele clubs in the area.

Tickets for the evening were completely sold out beforehand so it was a crowded venue with most of the audience having ukuleles with them as well as the performers. 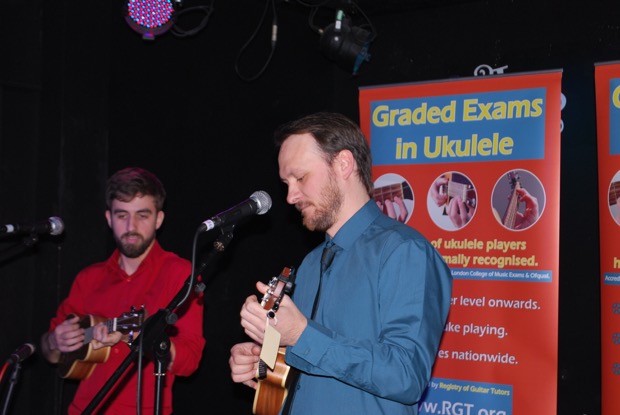 The event started with Ben Rouse and Mark Griffiths (co-hosting proceedings) conducting a workshop on the ukulele syllabus and demonstrating examples from the various sections of the five different levels that are available. Audience participation was definitely expected here and everyone who had come along with a uke engaged in some lively renditions of a selection of pieces from the syllabus – truly a group workshop!

The gig itself then started with performances from, among others, Muvva Pluckers, Lyndsey Lang and Ben Rouse himself. The Muvva Pluckers treated the audience to a blend of punk and subtle samba on their ukes.

There was then a sharp contrast with the gentle folk style singing and playing of Lyndsey. A solo instrumental set then from Ben as he showed how much energy it’s possible to create with the uke.

The evening continued with sets from Strumdiddlyumptious and Mike Krabbers, so a truly varied and entertaining evening overall. 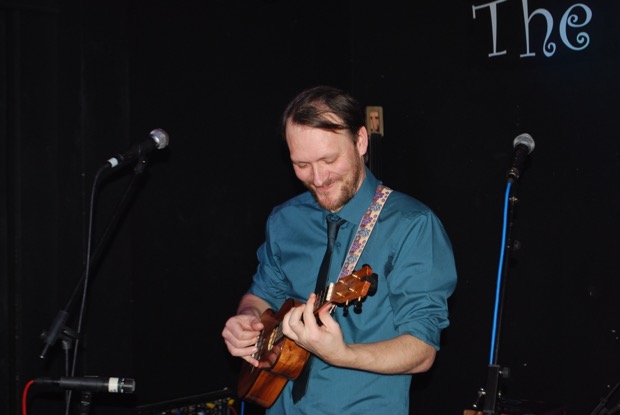 Along the way there were sing and play-a-longs with the audience’s ukuleles to get everyone in the festive mood. Quite a night!

Further details about events being organised by Ben and Mark can be found at: www.portsmouthukulele.co.uk