I believe that success in terms of articulation and definition – and, ultimately, “speed” – often has more to do with the speed of thought (i.e. the initiator) rather than pure physical motion (i.e. muscular response).

Paradoxically, thinking about something whilst attempting to do it is a distraction in itself, so don’t dwell on anything too long or fixate: fixating will make you get ‘stuck’ somewhere along the way. Curiously, I find staring into space or the middle distance helps!

Thinking about things whilst trying to perform them usually causes problems such as mental overload, confusion, self-distraction or, paradoxically, loss of concentration: “Where was I?” or “What exactly was I supposed to be doing?”. Again, it’s the mental distractions that can be the most disruptive.

Here’s an analogy: you’re standing rather precariously on a rock in the middle of a stream, with an enemy firing arrows at you. What happens if you suddenly become aware of the rock itself? You get distracted and fall victim!

Back to guitar playing, if, when playing a tricky lick, I suddenly become aware of some facet of a plectrum, for instance, I invariably lose concentration.

The essential thing is to focus and keep refocusing.

But, in doing so, minimize the amount of focal points. For example, don’t think: (strings) 1, 2, 3, 4, but rather, 1, (2), 3, (4) – where the bracketed items are not the focus of attention and are almost casually skipped over, mentally at least. You could reduce that to being concerned with only one string from a group.

I advise practising acceleration while looping – circuitous exercises or cyclical patterns are great for this. Begin by possibly enunciating the moves i.e. the string pattern or actual finger plucking moves; only do this at the learning stage though.

1. Accent one or more notes in particular. This aids focus (cf. point 3, below).

2. Relax! Accelerate when practicing a cyclical exercise, but when you hit a ‘brick wall’, don’t stop! Rather, back off a bit and then, in a determined manner, increase the tempo beyond ‘the brick wall tempo’.

3. For sequencing type exercises, and especially as regards plectrum technique, focus on only one element at a time. In practice this could be the initial scale degree – the ‘boundary note’ – of each pattern as it ascends or descends. Don’t burden yourself trying to mentally track every passing note.

Thinking slightly ahead to a boundary note whilst playing is a good way to focus. Furthermore, for sequencing type exercises involving scale patterns, bring to mind, part way through the sequence, the lattermost scale degree of each pattern (the ‘boundary note’) as it ascends or descends.

Make it something other than a number counting exercise. It’s easier to contemplate an intervallic leap (being advanced through a scale sequence).

In doing so you continually create a fresh point of focus. To reiterate, focus on only one element at a time: avoid having multiple points of focus (mind chatter is terribly disruptive).

Below are a few of the technical exercises I recommend to help develop speed. 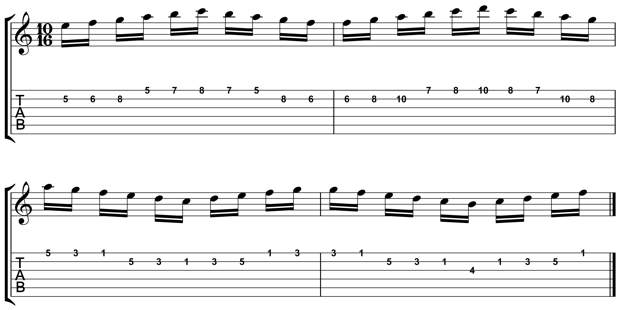 Sometimes you’ll find you can confidently play (a line) ascending, but not descending or vice versa.

Analyse the necessary physicality of retrograde inversion (it’s not necessarily the reverse motion). The exercise below should make this point clear.

As regards keeping your fingers in shape as it were, I recommend practicing a variety of patterns in a considered, structured way.

You want your finger(s) to spontaneously or instantaneously go wherever and whenever you require; so prepare your fretting hand by devising exercises that include all possible finger movements.

Have you ever found that you’ve fastidiously practised at home, but can’t reproduce (a line) on a gig/session?

If subconscious fear or trepidation exists then it has to be overcome. The fact is, it’s hesitation that is usually the cause of the problem. I suggest taking a pragmatic approach here: Practice starting the lick or line in every possible place – displace it.

Applying timing or rhythmic displacement is a powerful technique and it’s a great confidence builder.

Consider whether you should practice only the problem, in isolation, or include what led up to the problem. Often it’s something that happened along the way, possibly just before the main item, that concerns or worries you.